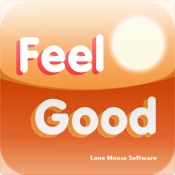 At the onset I would like to thank everyone for being so enthusiastic in responding to the “Busiess Stores” and appreciating the business branding idea. I got some 20 responses and from these I am going to publish two which I found very interesting. I would like to introduce David Crane, whose story was very gripping, interesting and inspiring to read.David Crane is a business entrepreneur who left his highly stressful Silicon Valley job to live with his family. Out of excitement but more out of challenge to himself, he developed an app ¡°feel good¡± for iPhone mainly to be used by his family. The idea caught on and now the application is available in all iPhone Stores. He currently lives with his family in La Honda and runs Lone Moose Software where he develops easy-to-use software in different domains.The Story published here has been written by Julia Scott and tells of the struggles of David Crane in developing ¡°feel good software¡± and his inspiration behind developing it.

So good, in fact, that he would give himself five gold stars today with his new iPhone app, the Feel Good Tracker.

Crane, 55, is hoping to hit it big with the new app, which sells at the iTunes store for $1.99. But if he doesn’t, that’s OK too. Crane is so blissed out most of the time these days that creating the software has been its own Zen reward.

“People are highly stressed, as I was, and I think they need a good way to deal with stress. In this often hypercritical world, it’s nice to focus on the positive,” said Crane, who lives in rural La Honda with his wife and son.

The power of positive reinforcement is a cornerstone of both New Age self-help philosophy and the best part of a session on the therapist’s couch. With the Feel Good Tracker, Crane wanted to put the power of self-reinforcement into the user’s own hands. The no-frills app has a deliberately simple interface. It starts off with a blank screen for new entries, with space for a title and notes, and the option to reward oneself with up to five gold stars. If only outside affirmation will do, there’s an option to e-mail each entry. That’s it.

“It’s like what you get in kindergarten. It’s kind of a little reward system,” said Crane, referring to the gold stars.

Crane said he will release an update which allows users to upload photos, and he hopes it will help sell the app, which has fewer than 500 downloads so far.

He’s also developing a version of the Feel Good Tracker for the Windows Phone 7.

The Feel Good Tracker was born from an epiphany Crane had while talking to his brother-in-law on a trip to Idaho in 2009.

“He thought it would be neat to have a way to encourage each other to go biking and hiking and doing other forms of exercise,” said Crane, who uses his app to track the mountain biking he does every day. He says he’s lost weight, and so has his brother-in-law.

Before long, the growing list of accomplishments becomes its own reward, according to Judy Miller, a friend of Crane’s mother-in-law who downloaded the app and uses it to monitor her blood pressure.

“I recorded it every day to see what it was and whether it would go down depending on what I did,” said Miller, a civil servant who lives in Sacramento. The result? Her blood pressure dropped substantially — and she had an activity record to bring in and show her doctor.

Crane has heard from other people who have used his app to keep to an exercise regimen, track the health of an ailing horse, and help their child manage her anxiety.

At first, the app wasn’t even intended for public consumption. It was just Crane teaching himself how to design something for the iPhone. He wanted to show himself that he could so something new after more than eight years as a software engineer with Cepheid, a Sunnyvale-based multinational corporation that manufactures devices for DNA and anthrax testing.

Crane left Cepheid a few months after his mother passed away in July 2009. “It was kind of a ‘life is too short’ moment,” he recalled.

He didn’t know what he wanted to do with his life, but he did know he wanted to be able to spend Christmas with his family without worrying about having to get back to the office. Last Christmas, he spent a month with his daughter, who was home from college. They saw movies and took hikes together. It was worth five gold stars.”

To view a large variety of promotional products for your small business promotion and to enjoy low price and discounts please visit our website at www.promodirect.com